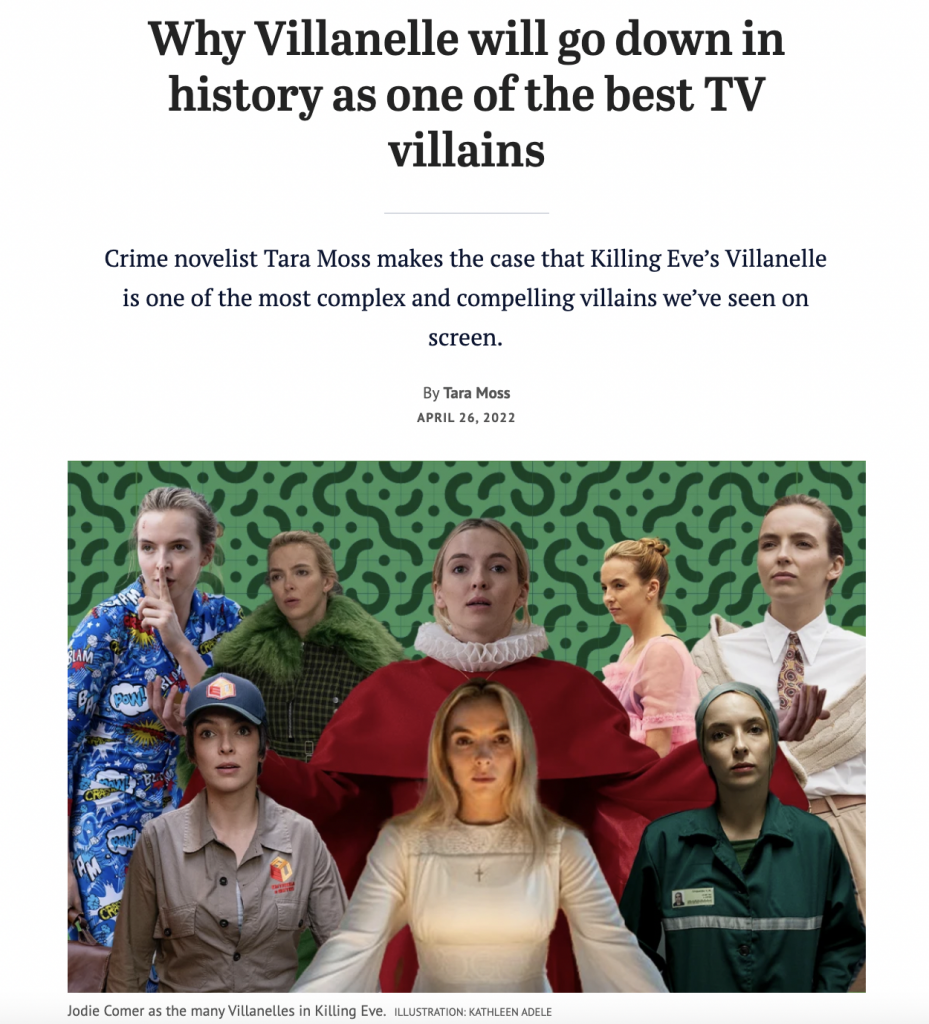 Crime novelist Tara Moss makes the case that Killing Eve’s Villanelle is one of the most complex and compelling villains we’ve seen on screen. APRIL 26, 2022, Sydney Morning Herald and The Age

WHY CLASSIC CRIME FICTION WAS OBSESSED WITH FASHION, Crime Reads
Every suit, every dress tells a story.
DECEMBER 29, 2020 BY TARA MOSS

‘A ferocious ambassador for human rights, Tara Moss wastes no time in debunking the sentiment behind the playground chant, “Sticks and stones may break my bones but words will never hurt me”. Her opening statement makes clear that real people write the real words that impact on real people on the other side of the computer screen. Unlike Ian Thorpe, … Read More..

Why rape is not ‘sex’ and survivors don’t ‘confess

Stories have always mattered. Media coverage helps inform our view of the world, and cements – or challenges – social attitudes. Rightly or wrongly, much like the parables of old, news and media stories can carry the weight of lessons. When we read the news today, what do we learn about issues like sexual assault and violence against women? Let’s take a look at some … Read More..

Why are women’s voices judged more harshly than men’s

Acclaimed author Tara Moss speaks out in an edited extract from her new book, Speaking Out: A 21st Century Handbook for Women and Girls, looking at how gendered perceptions and old-fashioned social norms impact the way we listen – or don’t listen – to women when they speak out: ‘Fortunately, not many people these days will openly admit to not wanting to … Read More..

Girls will be Boys

If it’s true we are all androgynous, why are we so rigid about dress? Tara Moss maps her journey from tomboy to “full dude” Victor Lamour in homage to the unsung genre of Drag King. Read More..

On a visit to one of the hundreds of tented refugee camps in Lebanon, UNICEF ambassador Tara Moss discovered a horrific development: the sale of displaced Syrian girls as child brides. Read More..

Australian author and UNICEF Child Survival Ambassador, Tara Moss has just returned from Lebanon where she visited refugees from the Syrian conflict. What she saw in the camps and informal settlements has had a deep impact on her. Tara is particularly concerned that the plight of Syrian refugees has slipped off the news agenda. “I can’t turn away. We can’t … Read More..

Tara speaks to Sunrise about her time visiting refugee camps in Lebanon where millions of Syrian refugees are living, having fled from the violent conflict in Syria, and why she is raising money for UNICEF’s work. Read More..

I am sitting cross-legged on a concrete slab in a home that is not a home. This is a makeshift shelter of corrugated iron and plastic sheeting, about the size of a parking spot, and it accommodates a displaced Syrian family with three young children. There is no door. Directly outside the open entrance is the dust and weather of … Read More..

Amanda Palmer knows all about asking. Performing as a living statue in a wedding dress, she wordlessly asked thousands of passersby for their dollars. But she finds there are important things in life that she can’t ask for and she learns that she isn’t alone in this. In her new book, she explores and discovers the emotional, philosophical, and practical …Read More..

Tara Moss: Why domestic violence is a whole of society issue

In conversation with Pallavi Sinha, author and patron of the Full Stop Foundation Tara Moss discusses the statistics of domestic violence in Australia and why it requires a whole-of-society response. Read More..

Interview with Australian of the Year Rosie Batty

When two young men lose their lives in drunken assaults in the space of a few weeks, governments declare ‘Enough is enough’, and enact strict regulation to prevent another incident. But despite one Australian woman being killed by a current or former partner every week, family violence doesn’t attract anywhere near an equivalent amount of airtime, or popular outrage. Rosie … Read More..

Unless we take action, our goals on child survival will not be met

In the years I have been involved with UNICEF I have become closely connected to the stories of mothers and parents in Australia and around the world. As a patron of the Baby Friendly Health Initiative I have met women for whom access to health care has given them the confidence to raise healthy, happy children through the first days … Read More..

Tara Moss interviews Egyptian-American activist and journalist Mona Eltahawy about the situation for women in the Arab world, her controversial essay ‘Why Do They Hate Us?’ and her experience of being assaulted as a protester in Tahrir Square. Read More..

We grabbed All About Women speaker Ilwad Elman for a backstage interview with Tara Moss at the festival. Watch Ilwad discuss the issues facing her home country of Somalia, what she’s doing to help, and why she left a comfortable life in Canada to do so. Read More..

The Manus Island Regional Processing Centre, located off the north east coast of Papua New Guinea, is eight hundred kilometres from the country’s capital, Port Moresby, and even further away from Canberra. Last July, when Kevin Rudd announced that asylum seekers arriving by boat would be sent to Manus and settled in PNG, many thought they would be out of … Read More..

In February I was unexpectedly contacted by one of my many long-standing crime research contacts. He explained that he is currently stationed at Manus Island, and that the information being made public about the violence that took place there was not correct. He explained that he was one of those who worked on the now deceased Mr Reza Barati, 23, … Read More..

Nauru and Manus Island – The Inside Story, SBS

Inhumane conditions, self-harming and mismanagement… we’ve heard the claims about life inside the Nauru and Manus Island detention centres. Now Dateline has the evidence of what’s really going on there. Read More..

Images obtained by author Tara Moss, from contacts on Manus Island, show the aftermath of unrest which left one man – Reza Barati – dead. Moss blogs about more details on the photographs and other events on Manus… Read More..

The ABC has obtained audio recordings made inside the Manus Island detention centre before and after the deadly violence last month. The recordings suggest protests in the days leading up to the riot were noisy but non-violent. They also give new accounts of gunfire and tell of ongoing fears of further attacks. The audio was provided to the ABC by … Read More..

The Festival of Dangerous Ideas : ‘There Are No Sexual Ethics’ panel

The Festival of Dangerous Ideas | November 2, 2013

The only way forward…

Conversations about literature are too often haunted by nostalgia. The digital age is not the end of literature. It is only change, and I welcome it, writes Tara Moss. Read More..

Why World Breastfeeding Week is important

World Breastfeeding Week is celebrated around the world from August 1. This year’s theme is ‘support’, and, as Tara Moss writes, it’s a fitting focus for modern times. ‘A mother’s choice about how to feed her child must be respected. She is the one doing the feeding. The rest of us can be supportive of her choice. In my view, … Read More..

Deadlier Than The Male: Femme Fatales, from Eve to Amanda Knox

Throughout history many – if not most – cultures have perpetuated the myth of the evil woman. In a recent Lunchbox/Soapbox address, Tara Moss discussed evil women, female criminals and the demonisation of the female gender: from Eve and Pandora to Elizabeth Bathory and Paula Broadwell. Read the essay here. Read More..

Women still outnumbered where it counts

It is often said that this is ”the year of the woman” – in politics, in sport, in the arts. And it seems like it is. You may have noticed that our Prime Minister is a woman. Our Governor-General, too. Our influential American friends have the largest-ever number of women in the Senate. Women are everywhere, it seems. Sure, there … Read More..

Sunday, November 25th is White Ribbon Day and the UN International Day for the Elimination of Violence against Women. We can make a difference together. And we must, because according to the largest study ever published on the problem of violence against women – a study conducted in 70 countries over 40 years – violence is ‘a bigger danger to women than cancer’. Read More..

Women are their own worst enemies? Think again.

‘All women hate each other”, or so the saying goes. It is also a view of women many instinctively agree with. From the sports field to the boardroom, male ambition and competitiveness is praised, yet the term ”ambitious”, when it describes a female, is often used with ambivalence. There is a nasty side to female competition and aggression, we are …Read More..

Who do you look up to?

Role models don’t necessarily have to walk red carpets or lead countries. In fact, they don’t need to be famous at all. There is no doubt that the role models we choose significantly impact our lives. At their best, they can inspire us to grow, to learn and to be better human beings. They can show us that something is … Read More..

Why has breastfeeding become controversial?

Why has breastfeeding become so controversial? First there was the debate around the breastfeeding mum in The Slap, then the fuss over the recent Time magazine cover featuring a breastfeeding three-year-old with the unfortunate headline “Are you mum enough?” Read More..

Crime author and TV host Tara Moss examines why female criminals are softened for their portrayal on screens big and small. Read More..

You owe our PM an apology, Sir.

This week Australia Agricultural Co CEO David Farley compared Prime Minister Julia Gillard to ‘an old cow’. This while explaining plans to build an abattoir near Darwin that – wait for it – specialises in slaughtering old cows. Read More..

In Defence of Birth Plans

Birthzillas, Bridezillas and perhaps all ‘Zillas’ are bad news. It’s amusing stuff, but the thing is, birth plans are helpful for many parents, and an increasing number of obstetricians and midwives request them. There are a number of reasons for this. Read More..

All of a sudden it seems everyone’s a feminist. Women who once rejected the term now embrace it. Anti-abortion campaigners call themselves feminist. Meryl Streep says Margaret Thatcher was a feminist. At one point George Bush said we went to war in Afghanistan to fight for women’s rights. Read More..

The Fear of Giving Birth

‘I died, but it was fine,” a woman at a barbecue told me when I was nine months’ pregnant. She was a stranger, her story unsolicited. As I nodded and nervously sipped a glass of water, she explained how she’d suffered from pre-eclampsia, “died” on the obstetrician’s table and been brought back to life. Read More..

A Night with the Ghosts

When push comes to shove, home births don’t deserve to be demonised

Monty Python’s 1983 film The Meaning of Life begins with a woman in hospital about to give birth. Comedians Graham Chapman and John Cleese are dressed as doctors in scrubs, surrounded by expensive hospital equipment (including the machine that goes ”ping”). Read More..